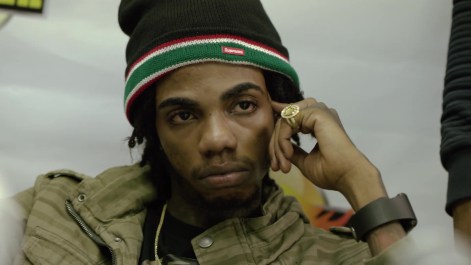 Deejay Alkaline could spend the entire weekend in jail as the police press forward with a murder investigation.

Senior Superintendent of Police Clinton Laing told THE STAR NEWSPAPER yesterday that Alkaline is still in custody and that the investigations continue.

“The investigations will continue for the weekend but whether he is going to say or not I can’t say at this point. It depends on what happens during the investigations,” Laing said.

The entertainer, whose given name is Earlan Bartley, along with his attorney, reported to the Area 4 Headquarters Thursday morning, where he was questioned in relation to an ongoing murder probe.

The deejay was locked up Thursday after he turned himself into investigators who are probing a case of murder.

Asked if Alkaline is being treated as a suspect or a witness in the matter, Laing said “we are seeing how best he can assist in a case”.

Attorney Peter Champagnie said that following the question and answer session on Thursday, the police indicated that they would review the material they had before deciding their next move.

Champagnie said there has been no word from the police about their next course of action.

He said that if his client is not released by Monday he will go to court to apply for an order to have him released.